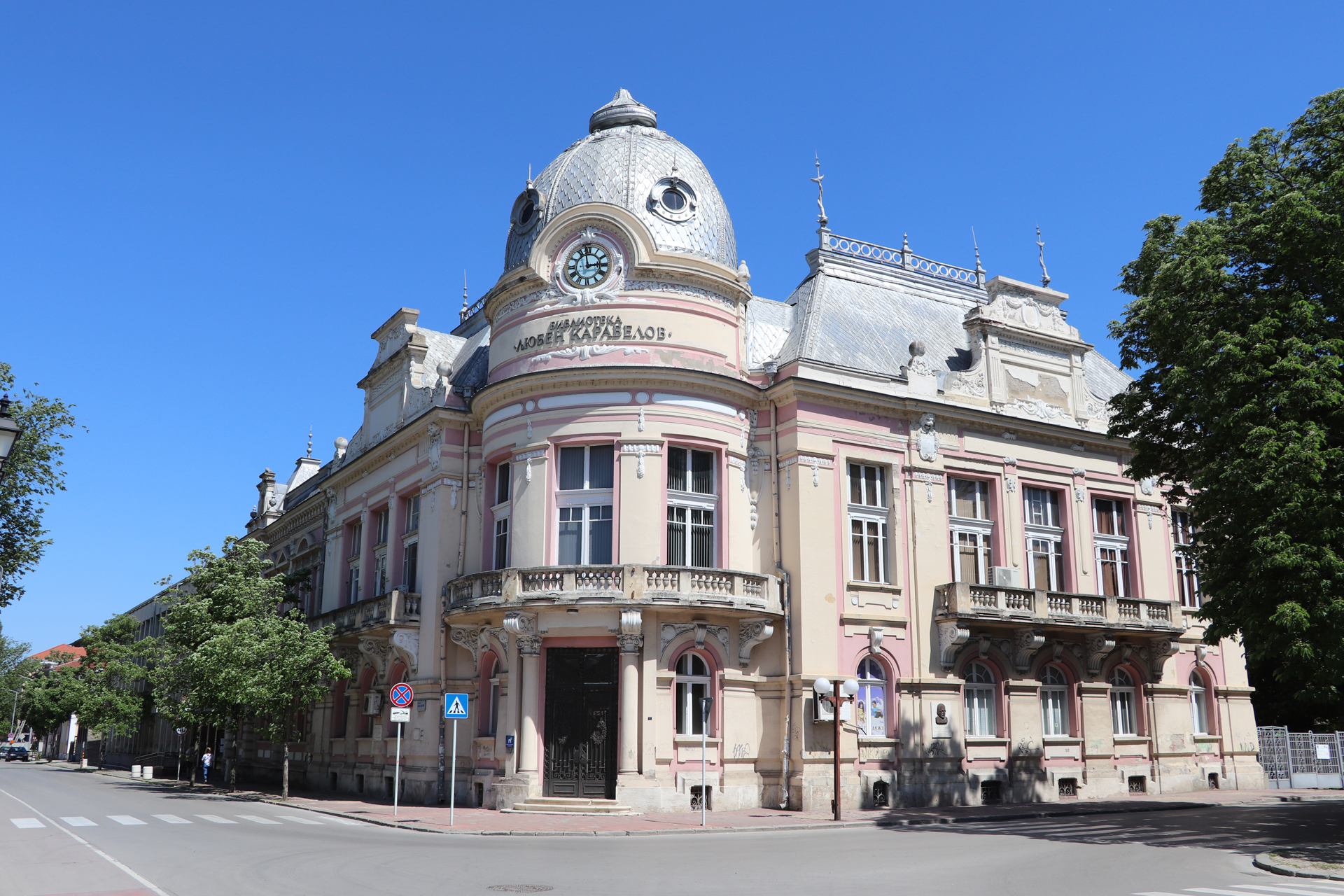 The Ruse Library is one of the oldest spiritual centres in Bulgaria. According to municipal registers, it was established on February 11, 1888 — 10 months before the opening of Sofia University (December 8, 1888).  Thus, it legitimized itself as an essential part of the nationwide public, social, economic and cultural progress immediately after the Liberation, when the members of the Danube Education Society embarked on the establishment of the first city public library. Article 1 of its Charter states the most important point, namely: “… to lay the foundations of a city library”.

In 1891 the first librarian was appointed and it was decided to complete the stock with 1 copy of every title. In the same year, a Library Committee was established, which existed until 1926. Since 1895, the library's activity has been reported regularly to the community on the pages of the Ruse Municipal Gazette. The first inventory book called General Inventory for Inspection was introduced. In 1901, the library was moved to the Dohodno Zdanie building. 1906 marks the start of the study and preparation for the introduction of the Decimal Classification of Books. In 1913, the first card catalogues were developed. Another relocation of the library was in 1928, when it was provided with premises on the 2nd floor of the building of the Theatre. The problems with the library building continued until 1954, when the Municipality decided to move the library to the former Chamber of Commerce and Industry building. This is one of the remarkable monuments of architecture in Ruse, built to the design of Architect Nikola Lazarov in 1916 for the needs of the first Bulgarian Ruse Chamber of Commerce and Industry. In the 1970s, a modern complex with an upgraded book depository was built next to the old wing. The Children’s Department and the Circulation Department are set up there now.

By the end of 2020, the library stacks already include 627,744 documents. Lyuben Karavelov Regional Library has been a depository since 1954.

The collection of old-print and rare editions contains Bulgarian National Renaissance titles from the 1806 – 1878 period. The collection is for the most part made up of donations, the biggest being one of 257 book items donated by the bookseller Nikola Dakov. These include the first 1824 edition of Beron’s Fish Primer, a copy of Kiriakodromion or a Sunday Book by Sophronius of Vratsa, published in 1806 in Râmnicu Vâlcea, Romania and others. The Tetraevangelion/Four Gospel Book is the oldest edition in the collection of rare and valuable books; it was published in 1690 in Lviv, Russia.

The library contains part of Zahariy Stoyanov's personal collection — 115 volumes donated to the institution in 1936 by his daughter Zaharinka Stoyanova-Grombach.

In 1973, Academian Mihail Arnaudov who was born in Ruse entrusts most of his personal archives to the library. Defined into a separate bookstack, it amounts to over 7,000 items and documents: manuscripts, books, prints, periodicals, including his writing desk, chair, and inkwell. Since 2019, work has been underway to create a thematic digital collection online, presenting selected autographs and dedications from Academian Arnaudov’s personal library with tools to track consumer behaviour.

The library also preserves part of Zmey Goryanin's archive; the Bulgarian writer was born in Ruse under the birth name Svetlozar Akendiev Dimitrov. The archive is separated into an individual stock of more than 450 original documents which attest to the cultural-historical reality in Bulgaria in the first half of the 20th century.

Annually since 2005, the Library organises the International Ex Libris Competition. For the entire 15-year history of the competition, 1,618 artists from over 55 countries in Europe, Asia, Australia, North and South America have taken part in it; and the collection of unique prints includes 5,073 bookmarks which are presented in the European Digital Library – EUROPEANA. This documentary stack forms the only publicly available collection of bookplates (ex-librīs) in Bulgaria. The competition has become a phenomenon of collective cultural memory. The works included have obtained encyclopaedic value of intangible heritage created with special signs and modern messages to generations. Since 2019, part of the collection has formed a permanent exposition of bookplates (ex-librīs), located in the clock tower of the library.

The institution is also developing serious scientific and editorial activities. Annually since 2014, Lyuben Karavelov Regional Library hosts scientific conferences of a multidisciplinary nature, which over the years have been organized in partnership and with the support of the Ministry of Culture of the Republic of Bulgaria, Ruse Municipality, the Vasil Levski Foundation, the Institute for Historical Studies with the Bulgarian Academy of Sciences, the Faculty of History at Kliment Ohridski Sofia University, Angel Kanchev University of Ruse, the University of Agribusiness and Rural Development, Ruse Campus, University Multiprofile Hospital for Active Treatment Kanev AD in Ruse, Prof. Asen Diamandiev Music, Dance and Fine Arts Academy in Plovdiv. A compilation of the reports of each conference is also issued annually.

Most of the library’s work is funded by project activities. Over the past ten years, the library has implemented more than 40 projects funded by various donor organizations: EIFL – Electronic information for libraries under the PLIP Programme – Public Library Innovation Programme, Ruse Municipality and the Support Programme for Projects in the Field of Art and Culture, Global Libraries – Bulgaria Foundation, the European Commission's Culture Programme, the National Culture Fund, Agency for People with Disabilities, Ruse – Free Spirit City Foundation, Goethe Institute Bulgaria, INELI Balkans – an international network of innovation libraries from the Balkan region, bringing together library communities from 11 countries, the Ministry of Youth and Sports, the Ministry of Culture, the Econt Foundation, INTERREG V-A Romania – Bulgaria Programme 2014-2020 for cross-border cooperation.

The library is a significant and attractive centre in providing equal access to knowledge, culture, information and services to all community members. Every year, the library signs up more than 7,000 readers who take advantage of its traditional services, borrowing more than 153,000 library documents annually. More than 3,300 people participate in various forms of non-formal education each year. Cultural events are attended by more than 52,000 visitors, where only the visitors of the events for children being over 13,000 each year. The library is a contemporary centre for lifelong learning and social inclusion of all community members. Our mission is to work for the preservation of tangible and intangible cultural heritage, to create and maintain conditions for sustainable cultural development and spiritual consolidation of the community, to ensure equal opportunities for access to culture and education, to encourage active participation and inclusion in public life of all residents of Ruse and the region.