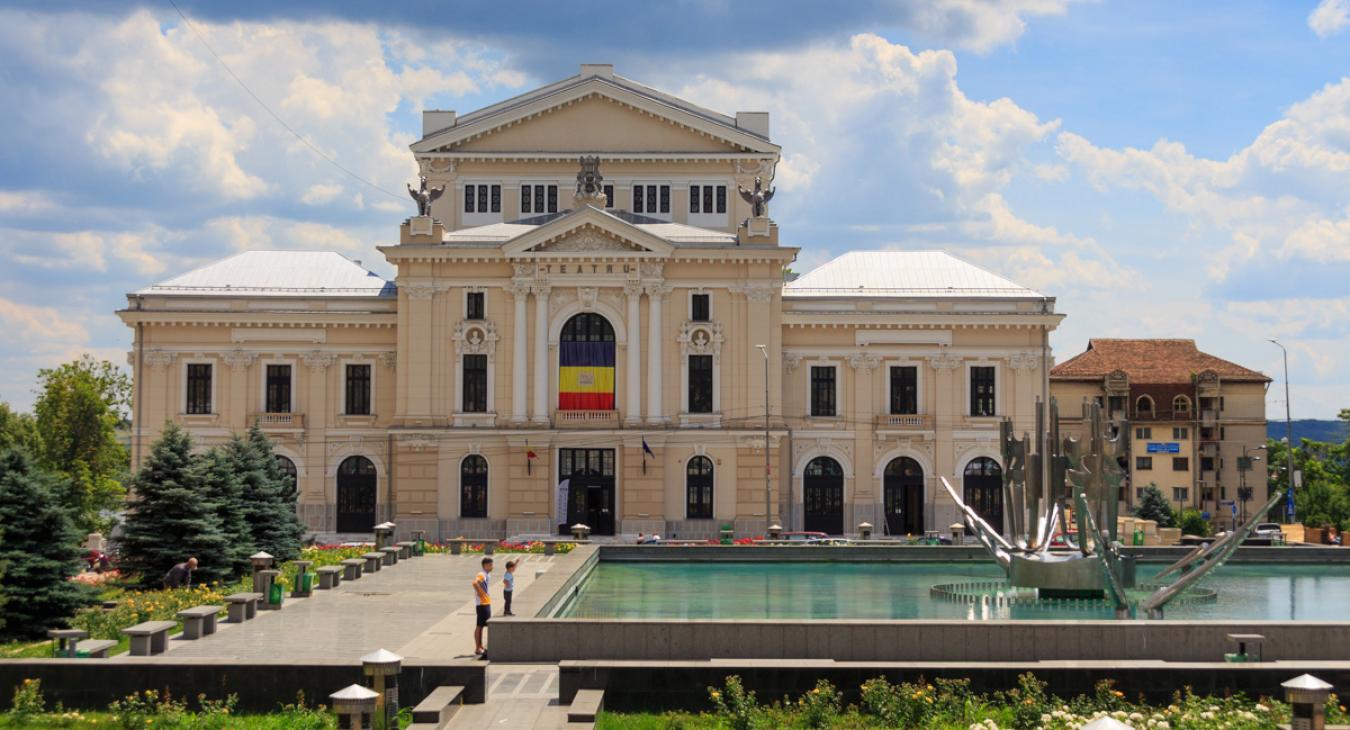 08:00 h. Our journey starts from the Teodor Costescu Palace of Culture in Drobeta Turnu Severin

Teodor Costescu Palace is one of the symbols of Severin and it was declared a protected historical monument included in the UNESCO list. We will learn about its long and interesting history to this day, when it is a real center of the city's cultural life. Visit to the Iron Gates Regional Museum. The museum is situated in the immediate vicinity of the Roman sites of the city. Created in 1912, it contains an impressive collection of artifacts, including a lapidarium of the Roman era. In 2010, ruins of a Roman amphitheater were discovered in the museum's courtyard.

Departure for Craiova. Our first stop is Alexandru and Aristia Aman District Library, Craiova. The atmosphere of this cultural center will take us back to the time when the modern Romanian nation was created.

Alexandru Aman was born in 1820 in Craiova. He studied law in Paris and became the first chairman of the Craiova Court of Appeal. But above all in the history of the city, he remained as a man who cared about the cultural progress of his city. Together with his wife Aristia, he left all his wealth to the community - houses, furniture, library, art collection, creating the Aman Foundation. The heirs of the foundation today are the Alexandru and Aristia Aman District Library, the Art Museum and the Oltenia Museum.

In 1921, poetess Elena Farago - a brilliant representative of Romanian literature, was appointed to manage the Aman Foundation, and she skillfully did so for more than three decades, living and creating in a house sharing the same yard with the seat of the Alexandru and Aristia Aman District Library, which was bequeathed by benefactors to be used exactly by the people who will run the foundation. Today this house houses the Elena Farago museum, representing writer's spirit and the times she lived in. Visit to the library and the museum.

Breakfast. Our literary walk continues to a preserved old house that was transformed into a modern place for culture with creative workshops and many vibrations of the spirit of the poet, whose name it bears - Traian Demetrescu House of Culture.

Traian Rafael Radu Demetrescu (1866 - 1896) was a Romanian poet, novelist and literary critic, considered to be one of the first symbolist authors in Romanian literature. The next milestone in Craiova's cultural life is the Marin Sorescu National Theater. Craiova's Theater occupies a special place in the history of Romanian theatrical activity. It was founded in 1850 and despite all the vicissitudes of the national history, it is still functioning today. Since 1990, it has presented primarily universal classics, especially Shakespeare and Moliere.

The Theater holds a Shakespeare festival, at an exceptional organizational and artistic level, and with its entire activity, it influences Romanian culture. The Theater bears proudly the name of Marin Sorescu (1936 - 1996) - a Romanian politician (Minister of Culture), a writer (poet, novelist, playwright, translator).

Free time for lunch and rest in Craiova's old center.

14:00 - Our cultural walk continues to the Historical and Archaeological Section of the Oltenia Museum, Craiova. The building, which today houses the museum, is built at the request of the Madona Dudu Church, in order to be used as a girls' school and it functioned as such until 1948, considered to be one of Romania's most prestigious schools. Oltenia Museum in Craiova was founded in 1915 as a result of the dedication of several famous families in the city.

The building of the Museum of Romanian Books and Exile Dianu House was built in the beginning of the 20th century, probably in 1906, as a private home, it is an architectural and stylistic landmark of Craiova. As of 2020, a project initiated by the Alexandru and Aristia Aman District Library is underway for restoring the house and turning it into an interactive institution aimed at attracting as many young people and children as possible to study works and unique documents, created by representatives of Romanian exile. The inauguration of the new cultural center in Craiova is expected in 2021.

Here we will also learn some facts about the life and work of writer Mihail Drumeş (1901 - 1982) who lived in the village of Balş near Craiova - one of the most read novelists in the period between the two wars, noted for his works Waltz Invitation, Love Letter (1938) and Seventh-grader Dima (1946).

When asked - "What do you find attractive in Romanian literature?" Hristo Boev, a translator who translated Mihail Drumeş's novel Waltz Invitation from Romanian into Bulgarian, replied "I was attracted by the fact that it depicts the human soul, as well as its genuineness, sincerity, modern sound, even from the era between the wars...."

Free time for lunch. Departure 15:00 for Vratsa, through Bechet - Oryahovo, crossing the border by ferryboat. Free time and overnight stay in Vratsa.

Breakfast. 9:00 From the sumptuous architecture of Craiova, our cultural journey will take us across the Danube to a Bulgarian city. On one side of it rise the rocks of the Balkan mountains, on the other side fields stretch all the way to the Danube, and between them is the city, living its everyday life, preserving its cultural heritage.

Vratsa is the only Bulgarian city where two medieval towers have been preserved, built by local feudal lords, probably in the 16th century. The larger one is the Meshchiite Tower next to the City Hall, and the smaller one, the Kurtpashova Tower, is right next to the museum building and it receives visitors.

Visit to the Regional Historical Museum where there is a hall with the famous find from the village of Ohoden - the burial of a woman named by archaeologists Todorka. Every year in July, the Todorka Sun Festival of Ancient Cultures is held at the site of the discovery, showcasing crafts, lifestyles and even dishes that are believed to have been eaten by prehistoric people. Then comes the crown of Thracian art - the Rogozen treasure, the richest treasure ever found in Bulgarian lands - a total of 165 vessels of fine silver with gilt, a peak in the art of Thracian jewelers. An exposition in the Botev Hall is dedicated to the legendary detachment of the poet and revolutionary Hristo Botev, whose feat marked the epilogue of the April Uprising.

Our walk continues along the Hristo Botev Regional Library, whose motto is "Tradition meets modern thinking" and is the cultural institution of the city, which pulsates with the rhythm of modernity and carries the Renaissance spirit of the city.

Then we go to the Sveti Sofroniy Vrachanski Ethnographic/Revival Complex consisting of three Revival houses and two municipal buildings of the same period - the Sveto Vaznesenie Church, as well as the homonymous first secular school in Vratsa. In two exhibition halls on the first floor of the Vaznesenie Revival school, following the four seasons, the way of life and rituals of the local population from the second half of the 19th century, as well as representatives of the Karakachan and Banat communities are presented. The hall on the second floor of the school is dedicated to Diko Iliev - the founder of wind music in Northwestern Bulgaria. Wind and percussion instruments used by the musicians in his orchestra, as well as some of Iliev's belongings and photos are shown.

13:00 Departure for Berkovitsa to the world of one of the most original contemporary Bulgarian authors Yordan Radichkov (1929-2004).

"Every man is a long sentence written with a lot of love and inspiration, yet full of spelling errors." Yordan Radichkov

Inaugurated on May 24, 2019 in a building near the community center in the center of Berkovitsa, the Yordan Radichkov Cultural Center is used for exhibitions, literary readings, meetings and talks with authors, as well as for presenting cultural and historical heritage. On Dec 20, 2019, the Municipality of Berkovitsa established the Yordan Radichkov National Literary Award for a collection of short stories, which is bestowed in the town of Berkovitsa on the writer's day of birth - October 24th. Possible visit to Ivan Vazov Museum House.

Breakfast. 9:00 Our walk in Vidin begins in front of the building of Mihalaki Georgiev Regional Library. Mihalaki Georgiev, born in 1854 in Vidin, was a Bulgarian writer/novelist, public figure, diplomat, and businessman. He was one of the representatives of modern Bulgarian literature that were formed as artists during the Revival but fully developed after the Liberation.

We continue to the Riverside City Garden, distinguishable along the entire Bulgarian Danube riverbank, which has a historically established character - its construction began in 1878, and today it cleverly integrates cultural monuments located within its territory in its landscape.

Our first stop in the park is the Osman Pazvantoglu Library - part of the Pazvantoglu ensemble, built in the late 18th and early 19th centuries. The inscription above the entrance shows that Pazvantoglu dedicated the library to his late mother. Today, the very well-preserved building is still covered by a dome on which the same heart is placed that crowns the top of the minaret instead of the traditional crescent, this substitution being regarded as one of the signs of Pazvantoglu's distinction from the sultan's authority. From 1793 until his death in 1807, he ruled as an independent ruler of the Vidin region, after he managed to separate the territory from the central government, and Sultan Selim III recognized him as a vassal pasha.

Pazvantoglu was an educated man interested in secular sciences, history and military affairs. He created one of the largest public libraries in the Balkans in the late 18th and early 19th centuries, and managed to gather therein over 2000 volumes of religious and secular books. About 70 donors were involved in the gathering of the extremely rich book fund for that time, the largest quantity of books being offered by Osman Pazvantoglu's father - Yomer aga Pasban zade. Today these books are in Sofia, Turkey and in Russia.

Along the river, we head to the medieval castle known by the name of Babini Vidini Kuli or Baba Vida. This is one of the best preserved medieval fortifications in Bulgaria, built on the remains of fortress walls of ancient Bononia. The Bulgarian construction of the castle began in the second half of the 10th century, and its main construction dates back to the era of the Second Bulgarian Kingdom (end of the 12th-14th centuries).

Free time for lunch. 14:30 h. Departure for Calafat - across the Danube Bridge ІІ and Cultural Port of Cetate - the Danube place for culture of the Romanian poet and journalist Mircea Dinescu. The idyll of centuries-old lindens and poplars, the river breeze, rustling leaves and the beautiful sunset over the Danube, combined with good food, wine and angel sculptures is the result of his dream, investment and efforts to restore this God-forgotten place in 1997 place, full of history and neglected beauty. Today, the Port hosts various cultural activities. One of them is the Divan Film Fest - a festival dedicated to Balkan film and culinary achievements. It is held every year at the end of August. Admission and camping for the festival is traditionally free. Free time. 18:00 - Departure back to Drobeta Turnu Severin Return - place - Teodor Costescu Palace of Culture, Drobeta Turnu Severin, Romania

transport, overnight stay in 3* hotels with breakfast included, tour guide service, estimate price for the described itinerary for a group of 40 persons - 260 Lv. excluding entrances for sites visited and optional additional excursions. (prices are effective as of July 2020)